Skip to content
I’ve enjoyed so many great experiences traveling, that it makes it difficult for me to decide which one to write about. So, I decided to look back through my picture archives and choose one that jumped out at me.

If you spent your life only traveling with family or close friends, like I used to, the thought of striking out on your own can be daunting. Fear of the unknown or of being in a strange place without your usual security blanket of people you are familiar with is a normal feeling at first.
Perhaps, then, you may consider going on an excursion with other like-minded people, even if you don’t know them. Yes, we were raised being cautioned about “stranger danger”, and while it is definitely a good idea to be circumspect, don’t allow an overabundance of apprehension to keep you from an adventure of a lifetime with friends you haven’t met yet.
This is my story of one time I overcame that uneasiness, and it turned out to be one of the most rewarding experiences of my life.

I’ve briefly mentioned before that I had joined Couchsurfing, basically a free AirBnB service for travelers, and had been hosting strangers from around the world in my Chicago studio apartment. One of the other great things about the organization were local meetups and opportunities to engage in planned activities with other members.
I had already enjoyed a camping trip with two locals in the late autumn of 2013, and we had only just met briefly before that outing. Even though the unexpected chilly (ARCTIC!) weather made it a challenge, we had an amazing time, and to this day, I am in touch with my two friends from time to time. 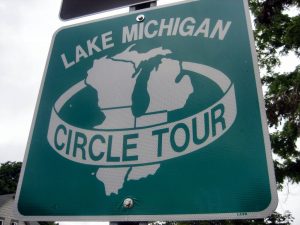 One thing that I had always wanted to do was to drive the circle route around Lake Michigan. I’d seen it advertised on road signs along U.S. 31 that ran along the western side of the state of Michigan when I lived there. So when a couple of local ladies posted in the website asking if others were interested in doing the circle tour, I excitedly signed up. It was to take place over the long Memorial Day weekend at the end of May 2015.

NOT MOURNING THOSE LEFT BEHIND

I was not the only one who expressed interest in going. At one point, there were over 12 who said that they were definitely in. However, most of those people didn’t have their own reliable transportation. Or any kind of gear. Or maybe money?
Whatever their reasons, the 12 or so people began to beg off one by one. So at the morning of departure, the Friday before the holiday, we were down to five. I was the one with the vehicle, a 1999 Toyota Avalon, which, in theory, was a six-passenger car.
However, only four of us met at the rendezvous point, a pancake house on the north side of Chicago. The fifth phoned and said he was running way late, and if we chose to leave without him, he would understand.
I had taken an unpaid day off work to start the trip, so I did something out of character for myself at the time. I spoke up and voted the unknown guy off the trip. And everyone else seemed to agree with me.
Before we got together at the pancake house, I briefly made contact and acquaintance with the two young women, Felicia and Marija, who happened to be roommates. But I really didn’t know anything about them. The fourth member of our car pool was Rahul, a recent arrival to Chicago. He had joined up and ended crashing on the couch in the ladies’ apartment the night before.
All three of my travel companions were in their early to mid-twenties. I was in my mid to late-forties. As I ate my breakfast, I secretly wondered how this generation gap might affect our four days spent in close quarters. Especially since only the two women knew each other at all.

Having ditched the late dude, we now had plenty of individual space in the car. Almost all of our gear fit in my generous trunk. I had brought a ten-person tent that I kept for myself after my divorce. The rest of it was sleeping bags, inflatable mattresses, spare clothing, and food. We had planned to camp along the way, so as to save money, and enjoy the outdoors.
Among my other possessions was a wallet full of compact discs that I had burned on my computer, using music from my extensive collection of hits from the 1970s and 80s. I wasn’t sure how well they would be received by the millennial group I was with, but it turned out that they loved the music. It wasn’t long before they were singing along with me, doing carpool karaoke.
The weather was absolutely perfect as we set out, moonroof open, windows down. I turned onto the onramp for the Kennedy Expressway going south. Traffic was building because of the holiday weekend, but we soon made it through the downtown Chicago Loop area and onto the Dan Ryan.
Normally, my choice of routes would have taken us south on I-94 to the I-80 interchange, where we would go east into Indiana before continuing on I-94 into Michigan. However, the ladies had mentioned that they really wanted to go to Gary, Indiana (a place where nobody wants to go), because they had always wanted to see Michael Jackson’s childhood home.
That was NOT on my itinerary, but I also recognized that this was not MY trip alone. So I put on a cheerful front and we got off of the Dan Ryan Expressway right around the Englewood neighborhood and onto the Chicago Skyway, or I-90, heading south-east. This is a toll road, and at some point, we came to the line of toll booths. I was dismayed to see that they didn’t currently accept my I-PASS transponder for a fly-through payment.
As I applied the brakes to come to a stop at the booth, I heard (and felt) a “clunk!” I didn’t know what it was, and it didn’t seem to continue as I accelerated away from the toll booth, I put it out of my mind.

HOME OF THE “KING OF POP”

Gary, Indiana is a sad reflection of what happens when the good times go bust. A once-burgeoning steel town, it is now but a husk of its former self. All that seems to be left is blight and crime. A very depressing scene to drive through.
The ladies used GPS map to guide me through the streets to a run-down and scary-looking neighborhood. Many of the small, bungalow-style houses were boarded up, and the rest had security fences, bars on the windows, and “Beware of Dog” signs, without any sign of dogs to beware of. Mostly, the yards looked unkempt, with scraggly bushes and brownish, or uncut grass.
But in the middle of that depressing ugliness, sat a beautifully-painted house. It also had a security fence around it, but instead of chain-link, it was wrought-iron with brick pillars. The lawn and shrubbery had been tended recently. There was a granite plinth with a tribute to M.J. and some information about his childhood in Gary.
No sign of life, and the gates were locked, but we took some pictures. After about fifteen minutes, we had seen what we had come to see, and decided to get back on the road to our adventure.