I have never been a violent person. At least not as a rule. Sure, when I was a kid, I used to get into angry fights with my brothers, and some punches and kicks were thrown, but mainly I was in defensive mode, waiting for them to foolishly try a karate-style kick to my face. That’s when I’d grab the swinging foot and dump the kicker unceremoniously on his ass. I didn’t follow up by punching them when they were down. There was the time when I was four (and I really don’t have a recollection of this story) that I evidently got so pissed at my babysitter that I threw a “D”-cell battery at her and knocked out a tooth.

Otherwise, I was afraid to get into fights. My parents strongly encouraged us to “turn the other cheek” and walk away when threatened or bullied by others. My fear was not so much of getting beat up as it was of getting in trouble at school and then subsequently at home. The two times that I recall fighting back ended with the other party complaining about a busted jaw or broken nose. Either way, blood was spilled with my single punch to the face. I was horrified by it. In my dreams, when I get into a physical altercation, my instinct is to fight to the death. In my dream-state, I am filled with so much rage and fear that I continue to pummel the other person until they are pretty much raw meat. I wake up in a sweat, with my heart pounding. Fighting is not something that I enjoy.

Violence in movies does not necessarily turn me off. I am not in love with it, but I’d prefer to see realistic portrayals of what happens when someone is shot, punched, hit by a train, etc., as long as it fits the storyline and is not gratuitous. But I have never enjoyed watching boxing matches, or the currently popular UFC-style fighting. The ancient Romans were entertained by such blood sport, and I had mistakenly thought that we had evolved past that. The sight of two men (or women) beating the shit out of each other for others’ amusement is not my choice of entertainment.

So, you would think that the sight of the Muay Thai ring commanding the center of the Reggae Bar in Koh Phi Phi, Thailand would hold zero interest for me. But the opposite was true. I was drawn to it. There was a large sign inside the bar stating that anyone volunteering to fight another patron for three, one-minute bouts would receive a free bucket of whiskey and mixer after the fight. The whiskey didn’t tempt me. But the thought of testing my fighting ability against another man somehow did. I can’t explain it. I wanted to get in that ring. I watched other contestants sparring, and it looked to me that they weren’t really taking it too seriously, just having a bit of fun clowning around. Even the Thais who got in to fight without the protective gloves and pads were hamming it up for the crowd of drinkers. I decided that I was going to sign up for this before I left the island.

The next day, I got up early and went on a planned scuba diving adventure. It was a lovely day and the dives went beautifully. Unfortunately, I got seasick (for the first time in my life) both times I returned to the boat, and ended up feeding the fish for a while. I rested for the better part of the late afternoon, even taking a nap that evening until about 9:30. Then I got up and headed over to the Reggae Bar to fulfill my promise to myself. I told one of the staff that I was interested in getting in the ring. So they had me crawl between the ropes and stand there while they asked who wanted to challenge me. A guy from Argentina, Luciano, about half my age and in good shape, stood up and volunteered. Great.

They gave us both a pair of boxing shorts (smelly, sweaty from other use), his red, mine blue. We stood around waiting for a bit for the other bouts to finish. As I drank the single beer that I had ordered, I chatted with him and we both reassured each other that we were only into it for the fun, that we weren’t REALLY going to be fighting hard. At least that was my impression. I had time to ask another patron to take pictures with my phone, and then it was time.

The referee explained the rules to us. No elbows, no knees. We could hit with our thick, boxing gloves and kick with our padded shins and feet. No hitting from behind, no kicks to the groin. That settled, we touched gloves, and the bell rang. The agreement that I had come to with Luciano didn’t seem to be understood exactly the same by both sides. He came at me and landed a heavy right cross to the left side of my face. My head snapped back a bit to the right, and my thought was, “what the hell??” He got one more good punch in before I realized that HIS idea of fun was different than mine. 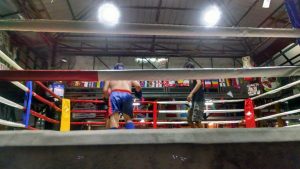 I got my gloves up and blocked his next few attempts. I saw that he was leaving his face exposed, and I took advantage of the opportunity to poke him right in the nose with a left jab. I was still pulling my punches however, because I somehow still believed that we were supposed to be fooling around. And that’s when he started kicking. His right leg shot out and around and connected with the side of my left thigh. It hurt like hell. This dude obviously had gone through a bit of training for this. Unfortunately for me, I kept letting him do it. Had I used my head a bit, I would have pivoted the other way, not exposing that side to his devastating kicks. But my (stupid) reaction was to drop my gloves and ask him, “didn’t we agree…?”… and immediately put them back up to block an oncoming blow. 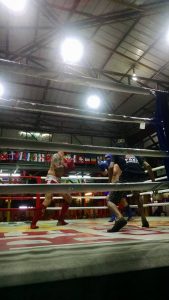 Mercifully, the bell rang, and we both retired to our corners. I took a small sip of water supplied by one of the attendants, and tried to stand straight with my left leg on fire. I looked around the crowd, and everyone seemed to be having a great time. I told myself that I could make it through another minute, then rest again. The bell rang again, and we were back at it. I ducked quite a few punches, and got in a couple of good ones myself. At one point, Luciano reeled backward and stumbled, but didn’t fall. I should have pressed my attack, but didn’t. He got in two more crushing kicks, then came at me. I ducked under a roundhouse right, popped him once. He then connected while I was heading away, and the punch took me off balance. I was headed to the mat. I got up right away, and looked for my opponent, but the ref was quickly in my face and removing my headgear. I asked him what was going on, and he said, “Stop fight. Over.”

“What? Why”, I bellowed. I was ok. My leg hurt like hell, but I wasn’t dazed. There wasn’t a count while I was down, it was less than a second.

“Safety”, came the reply. I was about to argue the point, and then I realized that my leg was done for. I couldn’t keep taking that punishment.

“Fine,” I acquiesced. I let them remove my gloves and footpads, then went over to the Argentinian and gave him a sweaty, congratulatory hug. The ref took us both by the hand, and raised Luciano’s high in the air. The crowd cheered, we both got medals and buckets of liquor. I limped over and removed the fighting shorts and put back on my own clothing. There were high fives and hugs and mentions of “great fight”, “that was awesome”, and “you’re brave” for both the winner and the loser.

Yeah, so I didn’t win. But I didn’t feel like a loser, either. It was a cool experience, and probably something I would try again. But next time….fuck Mr. Nice Guy.